Latest Changes: The new guidance expands CDC’s recommendations for the prevention of sexually transmitted Zika virus to include the possibility of sexual transmission from an infected woman. It expands CDC’s definition of sexual exposure to Zika to include sex without a barrier to protect against infection (including male or female condoms, among other methods) with any person — male or female — who has traveled to or lives in an area with Zika.

Are infections of same-sex partners being identified?
To date, there has been one case of male-to-male sexual transmission in the United States; none of the confirmed cases of sexual transmission have been female-to-female. However, other STDs can be passed between female sex partners, so it would not be unexpected to eventually have such a case documented. Women with Zika may pass the virus to sex partners through vaginal fluids or menstrual blood.

The use of barrier methods or abstinence are recommended to protect sex partners concerned about Zika. The partners of individuals who live in or traveled to areas with Zika should be tested if they had sex without using a barrier method and develop symptoms of Zika.

Studies are underway to help us better understand when and under what circumstances Zika can be transmitted sexually. Specifically, scientists are studying semen and vaginal secretions to understand the incidence of viral shedding, the concentrations of virus, and the duration and pattern (e.g., steady decline, intermittent on/off) of viral shedding in genital secretions.

How long can Zika be transmitted to sex partners after initial infection?
Our knowledge is growing rapidly but we don’t yet know exactly how long infected people can transmit Zika sexually. Available data are currently limited to case reports and we will have more information from studies that are underway. Detection of Zika virus RNA in semen has been reported up to 93 days after illness onset. Current evidence suggests that Zika virus persists longer in semen than in other body fluids, including vaginal fluids, urine, and blood. CDC therefore recommends that non-pregnant couples consider using barrier methods or abstaining from sex for at least 8 weeks after illness onset if a female partner is diagnosed with or experiences symptoms of Zika, and for at least 6 months if a male partner is diagnosed with or experiences symptoms of Zika. The longer precautionary period recommended for men with Zika takes into consideration the fact that Zika can persist in the semen of infected men after they have recovered from illness. Ongoing studies are systematically examining the incidence and duration of Zika virus shedding in the genital secretions of people with both symptomatic and asymptomatic Zika infection.

Should people who have been in areas with Zika take precautions to prevent sexual Zika transmission to their partners?
Yes, especially if their partner is pregnant. Zika virus infection during pregnancy can cause microcephaly and other severe fetal nervous system defects.

Men and women who have traveled to or live in an area of active Zika transmission and who have partners who are not pregnant can also use barrier methods consistently and correctly or not have sex, if they are concerned about sexually transmitting Zika. The recommended length of time for using barrier methods or not having sex will depend on the person’s gender, whether s/he experiences clinical illness compatible with Zika or has been diagnosed with Zika, and where s/he lives. Individuals considering use of barrier methods or abstinence should weigh the personal risks and benefits, which include:

At this time, testing a person’s blood, urine, or genital secretions to determine their potential risk of sexually transmitting Zika virus is not recommended for the following reasons:

First, a negative blood test or antibody test could be falsely reassuring. This can happen when:

For more information on diagnostic testing for Zika, see Testing for Zika(http://www.cdc.gov/zika/hc-providers/testing-for-zikavirus.html).

What is the role for STD/HIV Programs in the Zika response?
STD and HIV programs have expertise in patient education, communication, and condom promotion and distribution efforts that may be relevant to preventing sexual transmission of Zika virus. CDC encourages state and local programs to work with their state health officials and connect concerned STD/HIV clients with possible sexual exposure to Zika to primary care or reproductive health providers who can offer counseling and follow up.

Antibiotics are powerful drugs to treat serious infections. However, decades of overprescribing and misuse have resulted in bacteria that are increasingly resistant to these potent drugs, creating a growing threat of new superbugs that are difficult, and sometimes even impossible, to treat. According to the Centers for Disease Control and Prevention (CDC), drug-resistant bacteria cause two million illnesses and 23,000 deaths annually. National Quality Forum’s National Quality Partners (NQP) convened more than 25 experts and national stakeholders from the public and private sectors—including patient advocates, infectious disease physicians and pharmacists, and acute-care providers—to develop National Quality Partners Playbook: Antibiotic Stewardship in Acute Care. The Playbook is designed to help hospitals and health systems strengthen existing antibiotic stewardship initiatives or create antibiotic stewardship programs from the ground up. Based on CDC’s Core Elements of Hospital Antibiotic Stewardship Programs, NQP’s Playbook offers practical strategies for implementing high-quality antibiotic stewardship programs in hospitals nationwide.
To download the playbook, visit the National Quality Forum:
http://www.qualityforum.org/Publications/2016/05/Antibiotic_Stewardship_Playbook.aspx/utm_source=external&utm_medium=link&utm_term=ABX&utm_content=Playbook&utm_campaign=ABX

Impact of Healthcare-Associated Infections in Post-Acute and Long-Term Care Settings (Posted on May 12, 2016 by CDC's Safe Healthcare Blog)

Post-acute care settings such as skilled nursing facilities, long-term acute care hospitals (LTACHs) and acute inpatient rehabilitation facilities (IRFs) cater to an increasingly complex patient population transitioning out of the hospital, but still requiring significant care and support. Many of these individuals receive this care in a residential setting to foster social interactions and communal activities as part of the rehabilitation process. These special circumstances can make traditional infection prevention and control interventions difficult to implement. For example, in nursing homes, which provide a mixture of skilled nursing care and residential care, studies have estimated that 1 to 3 million serious healthcare-associated infections (HAIs) occur every year resulting in hospitalizations and associated mortality and morbidity.

Individuals receiving care in long-term care facilities, such as nursing homes and assisted living facilities, have unique challenges related to infection control. Luckily, there are evidence-based strategies to reduce infections in these patients. Basic interventions such as hand hygiene, maintaining a clean environment of care, safe injection practices, properly using personal protective equipment, and implementing a robust antibiotic stewardship program will dramatically reduce the risk of HAIs for these patients.

Specific data on the incidence of HAIs in post-acute care settings is currently limited to LTACHs and IRFs even though significantly more patients receive care in skilled nursing facilities. Participation in CDC’s National Healthcare Safety Network by skilled nursing facilities is crucial so we can better understand the impact and trends associated with HAIs in long-term care environments. These data provide useful tools to target infections and improve compliance with established evidence-based practices.

Infection preventionists and nursing leaders must work collaboratively across disciplines and partner with environmental services professionals and technicians, medical laboratory personnel, and clinical/consulting pharmacists to reduce HAIs. Sharing data and best practices along with championing HAI reduction initiatives will not only help reduce HAI rates, but more importantly, create a culture for sustained efforts to each Zero! One timely example of collaboration is improving antibiotic stewardship across the entire continuum of care. This requires interprofessional collaboration between both healthcare facilities (i.e. acute care hospitals and post-acute care facilities), providers, clinicians, and public health partners. Only through collaboration and a relentless focus on improving stewardship will healthcare benefit from the stewardship efforts. These focused efforts also will assist in reducing other HAI targets such as Clostridium difficile infections.

In an effort to keep you informed about the ongoing Elizabethkingia outbreak currently taking place, NADONA is providing

this clinical information update about the current outbreak which is being investigated by the Centers for Disease Control and Prevention.

Elizabethkingia is a genus of bacteria commonly found in the environment worldwide and has been detected in soil, river water and reservoirs.  However, it rarely makes people sick.  Cases are diagnosed through culture of body fluids, most often blood testing. Elizabethkingia has mostly caused meningitis in newborn babies and meningitis or bloodstream and respiratory infections in people with weakened immune systems. About 5-10 cases per state per year are reported in the United States, with a few small, localized outbreaks reported in both the US and other countries, usually in healthcare settings.

Elizabethkingia are Gram-negative bacteria that tend to be naturally resistant to many of the antibiotics that physicians may typically use to treat infections. However, the strain responsible for most of the cases in the current outbreak can be treated with several other antibiotics, so early recognition of the bacteria is critical to ensure patients receive appropriate diagnosis and treatment.

Confirmation of the species Elizabethkingia anophelis and determination whether cases are part of the ongoing outbreak is done through MALDI-TOF (which detects the protein fingerprints of a microbe) and optical mapping at CDC.

Elizabethkingia are opportunistic pathogens preferentially causing illness among immune compromised individuals or patients with underlying medical conditions, and are associated with high mortality. 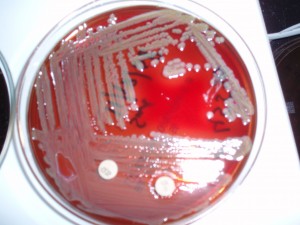 Therefore, early detection and treatment with an effective antibiotic regimen is important to increase the probability of good outcomes. The index of suspicion for Elizabethkingia infections should be high among patients with multiple co-morbid conditions, particularly malignancy, diabetes mellitus, chronic renal disease or end-stage renal disease on dialysis.

In this outbreak, the bacteria primarily infect older adults and those who have serious underlying health conditions. The infection typically presents as septicemia and can be deadly if not treated early with appropriate antibiotics. (The fatality rate in the current outbreak is about 30%.) Clinicians who have patients with underlying health issues and bloodstream infections of unknown etiology should consider Elizabethkingia as a possible cause.

Diagnosis is made on the basis of results of culture from sterile sites, most often blood. However, owing to its rarity, some clinical laboratories use bacterial detection software that may misidentify Elizabethkingia as other bacteria. Therefore, if results come back as Flavobacterium meningosepticum or Chryseobacterium meningosepticum, CDC advises clinicians to report these results to the state health department for consultation, and to treat presumptively as E anophelis.

Healthcare professionals should follow the Centers for Disease Control and Prevention Guideline for Isolation Precautions: Preventing Transmission of Infectious Agents in Healthcare Settings and CDC Guideline for Management of Multidrug-Resistant Organisms in Healthcare Settings. Patients with Elizabethkingia infection should be placed on contact precautions out of an abundance of caution. For more information on the CDC Guidelines, please visit: http://www.cdc.gov/hicpac/pubs.html.

Even though this bacterium is resistant to many antimicrobials used to treat gram-negative rod bloodstream infections, Wisconsin clinical microbiology laboratories, along with CDC, have identified that the strains responsible for most cases in the current outbreak are susceptible to several antibiotics. These include fluoroquinolones, rifampin, minocycline, and trimethoprim/sulfamethoxazole. If possible, combination treatment is recommended over monotherapy. For best results, treatment should be selected based on antimicrobial susceptibility testing results for each suspected case.